Other places to visit

A variety of places to visit in Kos

Eleftherias (freedom) square is the main square of Kos town and it encloses all the islands history. There you can admire the ruins of the ancient agora, a part of the Saint John’s Knights medieval walls with one of the entrances, the Gate of Taxes, The Mosque of Nefterdar from the Ottoman conquest, and three characteristic Italian buildings used today as the Archaeological Museum, municipal library, cinema and agricultural market. In the square there are also a few modern cafes and the beginning of the Old Town which an area full with plenty shops, cafes and restaurants.

Therma beach is about 10km from Kos town. In this beach there are hot springs surrounded by a rock pool. In this pool, hot water coming from the mountain with usually ranging between 42oC and 50oC with elements such as Potassium, Sodium, Calcium, Magnesium and Chlorine its ideal for rheumatism, arthritis and any gynecological related issues. A good advice is to start from the surrounding rocks where water coming from the sea mixes with the hot water and to move towards hotter waters. Despite of the pleasure of the warm water it is better not to stay in the water for more than 20-30 minutes. The hot spring beach which was discovered in 1934, it is not visible from the road as it is between big rocks.

The traditional village of Antimachia is 23 kilometers south west of Kos town. It is a mostly agricultural village and in the main square you can see a very good representation of a traditional house called the «House of Antimachia», and an old traditional but still working wind mill called “Milos tou Papa” (the priest’s mill). 4 km from the village is the Castle of Antimachia which builded by the Knights of St. John to protect the inhabitants from the attacks of the pirates. The external walls are saved in a good condition and in the inner part you can see the ruins of some castle houses and the 16th and 18th century churches of Agios Nikolaos and Agia Paraskevi. 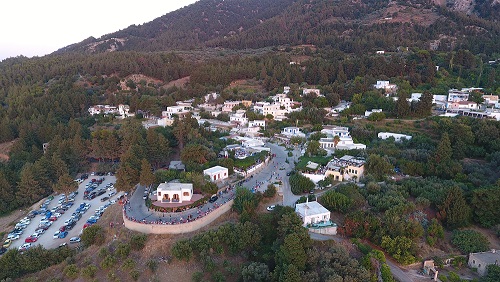 Zia is a traditional village perched on the slopes of Mt. Dikeos among green forest and running waters. Walking in the narrow streets you will found a lot of taverns and tourist shops, among traditional houses gardens full of flowers and a road that can lead you at the higher point of the island, the small church of Christos.

The outstanding view from the Zia’s balcony is unique, and it is the greatest Sunset point of the island from where you can see the islands of Pserimos, Kalymnos until deep into Turkey.

Marmari is 15 kilometers from of Kos town. With the long sandy beach and the short distance from Kos town among with the well-organized with umbrellas and sun beds facilities is a popular destination for swimming. There are several taverns and cafes offering refreshments and snacks, Greek and international cuisine.

Pyli is located 15 kilometers from Kos town and about 4 kilometers from Marmari and has big olive trees and lots of green. Around the central square with the traditional taverns and coffeehouses you can see traditionally built stone houses. You can visit the “Pyliotiko Spiti” (Pyli’s House) an old house with three rooms with original furniture and things still preserved just as they were 70 years ago. About 100m from there you can see a spring of cool water, flowing from 6 fountains dates from the time of the Ottoman occupation and close there the remains of the ancient tomb of the mythical local hero Charmylos who was a hero and king of Kos, and. You can visit the ruins of the Old Pyli and the castle at the top of a hill build during the Macedonian Dynasty of the Byzantine Empire. After Kos was conquered by the Knight of Saint John the castle was strengthen. 2 kilometers before arriving to Pyli, you can find a small artificial freshwater lake created in the 1920s from the Italian occupiers to beat the drought of the area. It was used for watering all the plain. Today it hosts turtles and ducks.

Tigaki 11 kilometers far from Kos town. It is a holiday resort where you can enjoy crystal clear waters and a very well organized and very long sandy beach. The waters are very shallow so it is ideal for families with small children and for those who are not good swimmers. It is also a place that the windsurfers will love because of the big waves in the open sea. A big variety of taverns, restaurants, fish houses, cafe and snack bars are there to satisfy the visitor among with the shops offering a many thinks to buy. “Alikies” (Salt Lake) is a wetland very close to the beach with a variety of flora and fauna, with migratory birds, such as pelicans and flamingos as well as animals such as water turtles. Until 1989 it functioned as a salt production installation.